Crypto markets are prospering today, especially the altcoins. Currently, the popular altcoin ADA, Cardano’s native coin, continuously registered its all-time highs since August 19th, surpassing the previous record of $2.47 on May 16th. As of May 2021, Cardano is the fifth-biggest cryptocurrency by market capitalization. Three months passed by, it became the third-largest one, behind Bitcoin and Ether.

Cardano is a blockchain platform that aims to be a better place where people can create smart contracts. It combines pioneering technologies to provide security and sustainability to decentralized applications, systems, and societies. Simply put, Cardano is a proof-of-stake blockchain platform with a native cryptocurrency called “ADA”.Learn more.

Data That You Ought to Know

This year, ADA broke the relatively stable trend of last year and traded in an obvious upward channel. According to statistics, the closing price of ADA for a total of 25 days this year exceeded $2, reaching a maximum of $2.96. Since March, the closing price has basically stabilized at above $1. The average price this year is about $1.21, an increase of 1,244.44% from the average price of $0.09 last year, a significant increase. However, Bitcoin has not risen that much. 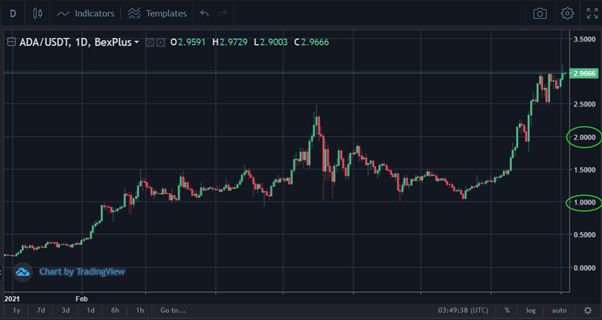 In addition to the rising currency prices, Cardano’s on-chain fundamentals have also developed to a greater extent this year. From the perspective of user scale, as of September 2nd, ADA’s non-zero addresses have reached 2.23 million, an annual growth of 248.44%, and a growth rate of 253.97% higher than last year. 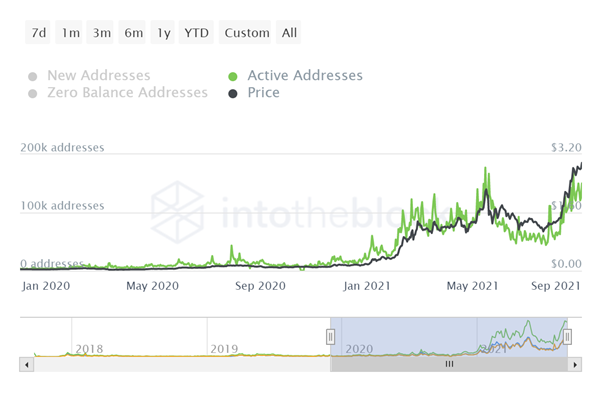 According to statistics, as of August 22nd, Cardano’s monthly average monthly on-chain transactions totaled approximately 973,000 times this year, an increase of 620.74% from the total monthly average of 135,000 transactions last year. The average growth rate higher than the overall growth rate may be affected by the number of transactions on the chain in May of this year, which exceeded 1.61 million, which coincided with the ADA’s currency price hitting a record high. 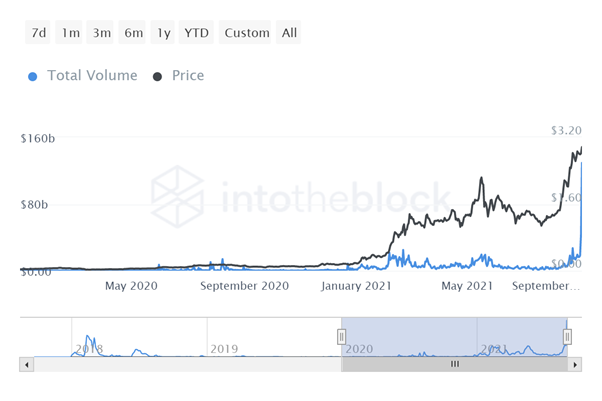 What Contributed to the skyrocketing ADA?

ADA has skyrocketed 1668% this year alone- the open price was $0.1753 and the all-time high by now was $3.10. It is now the best-performing top five cryptocurrencies compared to returns of 1,030% for Binance coin, 330% for Ether, and 59% for Bitcoin. However, it needs to be acknowledged that tokens are also susceptible to broader Crypto market volatility. Now, let’s see the main reasons for the bull run of ADA.

ADA soared in May after Elon Musk announced that Tesla would no longer accept payment in Bitcoin due to the hefty environmental downside of the massive amounts of electricity used to “mine” new coins. Instant time, the Crypto market crashed and has yet to fully recover, but ADA surged to new highs as investors flocked to more environmentally sustainable tokens.

The upcoming Alonzo upgrade might be the reason for the price soar of Cardano(ADA).  The upgrade will allow smart contracts to be built on the network, potentially making the Cardano blockchain more attractive to a wider amount of users. The Head of Delivery & Project at Input Output (IOHK), Nigel Hemsley, has revealed the launch date of the Cardano Alonzo upgrade-September 12nd.

*Smart contract is a piece of code that allows people to enter financial agreements without the need for a centralized party.

What To Expect On Cardano(ADA)?

Now all eyes will be on the September 12 Alonzo upgrade and how it will lead the ADA’s current positive run. If things go well, ADA could be a primary competitor to Ethereum, ushering another era in the Crypto market. Ethereum already offers smart contracts and has drawn the interest of institutional investors for its range of potential uses in financial services. The same situation could happen to Cardano.

investors are continuing to drive the value of Cardano higher due to the upgrade. ADA is among the most highly sought-after cryptocurrencies for new traders due to its still-relatively low price and a promising future.

most of the firms have a bullish forecast on Cardano’s future price. coin price Forecast sees a sizable upside and expects ADA fly to $5.47 by the end of 2021, which suggests an upside of 87 percent. WalletIInvestor forecasts that ADA will reach $4.736 in 2021 and $12.505 in five years, which is a potential return of 62 percent and 328 percent, respectively. Digital coin price also has a similar prediction and sees ADA reaching $4.3 by the end of 2021 and $5.33 by 2022.

How to Profit In This Bull Run?

●    Buy at a low price for long-term profit

after the release of the upgrade launch date, Cardano price was soaring tremendously. It can expect more price soar in the forthcoming days. Based on the positive price prediction on Cardano in the future years, some investors might switch their investments and put money in Cardano. With the confidence about the Alonzo upgrade, it is bright to buy this altcoin to gain long-term profit.

It can be seen from the green candles that Cardano goes well recently. If traders want to gain a short-term profit, leverage trading is greatly suggested.

Bexplus is a leading Crypto derivatives trading platform offering 100x leverage futures trading on a variety of trading pairs: BTC, ETH, ADA, DOGE, XRP, etc. Bexplus doesn’t require KYC and is popular among over 800k traders from over 200 countries/regions. In addition, it is safe for being accredited by MSB (money Services Business).

-No KYC requirement, registration with Email verification within a few minutes.
–Demo account with 10 BTC for traders to get familiar with leverage trading.
–100% bonus for every deposit.
–BTC interest wallet, up to 21% APY.
-Intuitive and full-featured App on Apple App Store and Google Play.
-24/7 customer support.

Trade on Bexplus and win the greatest profits! Register now！ 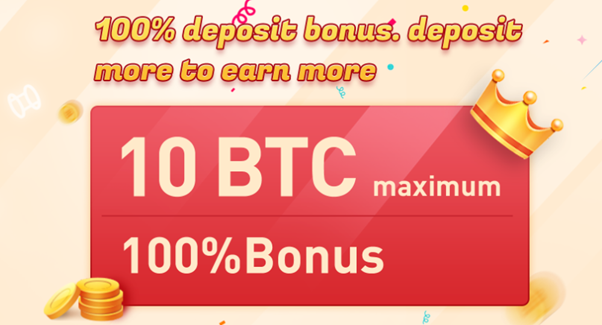 SHIB vs DOGE: Shiba Inu Up 48% Over Past Week, While Dogecoin Sees Only 26% Gains

SHIB vs DOGE: Shiba Inu Up 48% Over Past Week, While Dogecoin Sees Only 26% Gains

Harmony’s $100M Hack Was Due to a Compromised Multi-Sig Scheme, Says Analyst

June 27, 2022
We have an Efficient Enough Setup that We can Create NFTs in the Holder's Image — Creator's Interview